The Hippocratic notion of positive health is  the net result of maintaining proper balance of the five elements of nature, as they relate to human body: water (fluids) , earth (solid food), wind (oxygen), fire (energy) and ether.

Putting it all together, in an analogous way, the body, as an independent autonomous micro universe, is consisted of four fluids or ‘humors‘ (black ,bile, yellow bile, phlegm and blood) .

In today’s living, and adapting to the Santorini’s unique environment, we must reinstate the healthy balance of these humors, by facilitating the combined healing work of proper food, movement, harmonic acoustics and the Epicurean Philosophy of relaxation in a proper balanced environment.

In applying the Hippocratic concept of proper nutrition, it is worth looking into the core of recommendations as they were passed to us through the centuries.

According to Hippocrates:
“Positive health, requires a knowledge of man’s primary constitution, according to Empedocles, (what today we call genetics) and of the powers of various foods, both those natural to them and those resulting from human skill (today’s processed food). But eating alone is not enough for health. There must also be exercise (movement=life), of which the effects must likewise be known. The combination of these two things makes regimen, when proper attention is also given to the season of the year, the changes of the winds, the situation of his home (environmental Conditions) and the age of the individual. If there is any deficiency in food or exercise and improper environmental conditions, the body will fall sick”.

The modern notion that the Hippocratic nutritional concept was based on consuming raw foods, only, is misleading, to say the least. We will focus, as it was practiced in ancient times, on creating a balance mixing of raw and cooked foods thus supplying the body with adequate amounts of the needed nutrients (PRANA THERA DIET).

In applying the Hippocratic corpus of natural healthy nutrition, we must look at the inter-nutritional interaction of foods consumed today and  to re-establish the needed balance in our daily living.

Today all health problems are initiated when, human cells respond to nutritional insufficiency with inflammation when the synthesis of cell membrane is disturbed, due to overconsumption of pro inflammatory Omega-6  fatty acids, at the expense of the predominantly anti inflammatory Omega-3 fatty acids (OMEGA-3 DIET). This is the first message our body sends us, that something is wrong at the cellular level.

For the ancient Greeks, protein is considered the top nutrient in the food chain In Greek the word protein is a synthesis of two words. Proti+ina. Proti=first and ina= thread (thread of life).
True to the legendary tradition of the Ancient Greek Health Centers (Asclepia), our menu will be free of meat and poultry. Only sea food will be included in our cooking.(PR0TEINS, ZEA)

The Greek sea is considered free of contaminants due to the mild industrial development of Greece, and the Greek coast line is full of blue flags, indicating the cleanness of the water and therefore the fish GAVROS and  ANCHOVY caught in these waters are free of heavy metals, good tasting, and healthy.

Zea, also known as Triticum-dicoccum (emmer) is an ancient wheat that dates back to antiquity and was a key ingredient of the ancient Greeks, cultivated throughout the Ancient Greek world and slowly replaced during the late Roman period by wheat. It was also called by the Greeks Zeidoros, meaning the one who gives the gift of life.

The archaeological record indicates that domesticated ZEA wheat appeared about 8000 to 9000 BC in the Pre-pottery Neolithic period.

Zea was first domesticated in the Eastern Mediterranean Hellenic world, and widely cultivated in ancient times. Archeologists argue that the depictions of the Goddess Dimitra of agriculture judging from the size of the seed do not show wheat, but Zea.

Zea was a key ingredient in the diet of the ancient Greeks. The Greeks did not eat bread made from wheat, they would rather give to the animals. They ate bread Zea or Barley. Only in great need ate barley mixed with wheat.

Flour was the basis of the many nutrients used in Ancient Greece. Following the Hippocratic notion that, food consumption must follow given “proper attention to the season of the year, and the changes of the winds” we customize our food selection accordingly.

We are replacing white wheat bread with barley and the oldest stone ground wheat in the world, that is Zea or Zeia (in greek, Zea= Life). It may look like the common wheat but it’s nutritional facts are a lot different.

Zea contains minimum gluten (5.0-9-0%), rich (double the amount) in total diary fiber 7.2-20.7% and protein (14.0-24.2%) including the amino acid lysine, which strengthens the immune system and is the key element in the biochemical functions of the brain, an array of vitamins (like A, E, B) and minerals, very rich in magnesium and with 40% more potassium than wheat flour, and is easily digestible

Greece, due to its variety and differences in soil composition, mild different local microclimatic conditions and abundance of clear fresh water used for irrigation, produces an abundance of fresh, seasonal, biologically grown vegetable nuts and fruits.

In addition, thousands of endogenous unique to Greece wild grown herbs collected from the Greek countryside, will be available on a daily, seasonal basis to offer to our clients.

Additionally, we must take into account that the nutritional ingredients and food sources used on daily bases, are not only locally produced but will be imported, if needed, from the entire Ancient Greek world, extended and not limited, from the Gibraltar pillars, Africa and far into Asia.
As a matter of fact, the ancient Greeks were proud that, you can find in their food market different foods from different parts of the then known world.

Greek writers develop the most comprehensive list of herbs, nuts and other foods, which are not limited to the borders of what we consider Greece today. Therefore, we will include in our menu, nutrients in use during the Hellenistic world in an attempt to approach the Hippocratic- Pythagorean food notion.”

Proteins constitute one of the nutritional structural and functional pillars of the human body. In addition to sea food protein resources, we will reassure that the protein requirements, by our clients (visitors) will be met, on a daily bases, using a tasty blend of legumes, cereals, seeds and dairy products.

Historically, the first scientifically substantiated movement to inform human society about vegetarianism was made by Pythagoras, who is also considered the founder of the vegetarian movement, while it is well known that the fathers of Medicine.

Hippocrates and Asclepius, also practiced vegetarianism as therapeutic regiment. In addition to sea food protein we supplement our daily menu to meet our clients protein needs in such a way. For example, beans contain all the essential amino acids (AA), but not the amino acids Methionine and Tryptophan in the required amounts. So we say that beans have these two amino acids reduced (marginally). To keep the protein synthesis mechanism in place, we supplement these amino acids with other foods, which contain several amounts of Methionine and Tryptophan.

For example, bread is rich in Methionine and Tryptophan, so it can be supplemented with selected beans and provide the body with complete protein. On the other hand wheat flower (bread etc) is limited in the amino acid lycine. We replace wheat flour with Zea which is rich in the amino acid Lycine, vitamins (like A, E, B) and minerals (such as very rich in magnesium) and with 40% more potassium than wheat flour to supply the body with all the essential amino acids. 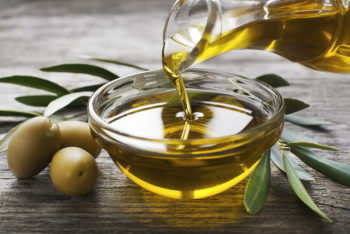 In our food preparation in cooking and salad dressings, we strictly use EVOO of superior quality from olive trees biologically cultivated. The Greek olive oil is known for its superiority when compare to all other olive oils as a result of the variety of olive trees, soil composition, weather condition and generally speaking of the special microclimate of the region they grow..
However, some olive oils are better than others.
Our EVOO contains the healthy Omega-9 fatty acid and the greatest amount of polyphenols.
The most strongly substantiated health benefit seems to be their antioxidant activity and the protection these phenolic compounds exert on blood lipid oxidation, anti-inflammatory and neuroprotective activity, anti-carcinogenic potential, modulation of gene expression, towards a protective mode for proteins, participating in the cellular mechanisms involved in oxidative stress resistance, inflammation or lipid metabolism, and a numerous of other health benefits resulting from the bioavailability of individual compounds in olives.
The Phenolic component, of most EVOO, range from low 50 to 300 mg/kg of oil. It is important to emphasize that it is not the characteristic of EVOO that makes the therapeutic difference, but the amount of the phenolic compounds present in the oil.
Our EVOO contains more than 600 mg/kg of olive oil (Silver award 2017-18). In medical terms, 5ml (one tea spoon) of our EVOO is considered a pharmacological dosage for protective and therapeutic means.

Our Greek wild Olive oil is unique for its proven function to protect human cardiovascular system. The wild Olive trees are growing in a remote mountain in central Greece.
The land looks as a wild jungle, dry, pure, organic, and certified by the TUV AUSTRIA HELLAS and found to have ZERO levels of any synthetic pesticides and fertilizers. Olive fruits are properly hand harvested and cold pressed.
With total polyphenols of about 1261 mg/kg the minimum guaranteed characteristics of our wild olive oil are:

“Olive Oil contains up to 300-fold more squalene than other vegetable oils and up to 5,000-fold more than some vegetable foods”,the other significant but rare source of squalene is in deep-sea shark varieties.

We created Prana Thera to inject a dose of spiritual awakeness with a holistic approach for the wellness of the body, mind and soul, based on proven ancient ways of life.

Prana Thera offers an all inclusive package that consists of Vibrational Healing Art Therapies, an advanced nutrition package based on Hippocrates and Omega 3 nutrition values and Energy-based accomodation.